Review of Child of a Hidden Sea by A.M. Dellamonica 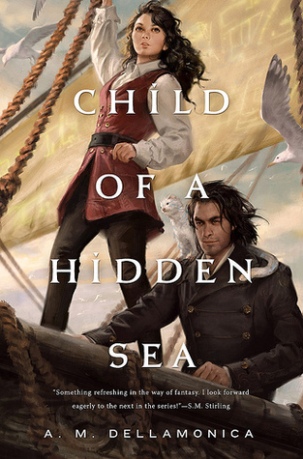 It has been a while since I have read a “portal to another world” fantasy, so I found myself looking forward to reading Child of a Hidden Sea, which is the first book in a new series.  I found myself quite surprised when reading this book, as it was nothing like my expectations.  Even though I did have some problems with the novel, overall I found it to be a fresh perspective on a familiar fantasy trope, and a book with a pretty decent plotline.

Child of a Hidden Sea is told from the perspective of twenty-four year old Sophie, a resident of San Francisco who is suddenly dropped into an ocean on an unfamiliar world after a failed attempt to reunite with her birth mother.  Sophie soon learns that she is in the world of Stormwrack, a place where magic is possible, despite its uncanny similarities to Earth.  Stormwrack is a world made up of island nations, and upon Sophie’s arrival the political climate between several different cultures is highly strained.  Now Sophie must help to solve a murder and prevent a war, all the while dealing with people who seem to take great offense at her presence in their world.

As I mentioned before, this book surprised me.  One of the elements I was not expecting this story to have was a good number of gay and bisexual characters.  It was not until fairly recently that diversity in sexual orientation was found in fantasy, and though I do not think that every fantasy book needs to/ calls for such diversity, it is nice to see progression in the genre.  Also, in this particular story, I thought that the addition of these characters added a whole lot to the story, and were not simply there for the sake of diversity.

Another surprising element of this novel was Sophie’s scientific curiosity.  She looks at the world through the eyes of a biologist (who is also well versed in several other scientific fields), and her journey to Stormwrack is incredibly exciting to her from a scientific standpoint.  As someone with a degree in Environmental Science, this is very similar to how I view the world, and I found Sophie’s inquiries into the local wildlife and landscape very similar to how I would act if I were suddenly dropped in another world.  It always bothers me in these types of books when the protagonist is dropped into a new world and either is completely oblivious to or not concerned at all with how this new world is different from his own (besides the obvious “this world has magic and mine doesn’t”).  I found this scientific examination of a different world to be one of the things that I enjoyed the most about this novel, and it is also the reason that I will continue to read more books in this series, even though I did have some issues with the story.

My biggest issue with this book is that it took me a while to get used to Sophie’s first person narrative.  In the first few chapters I found her narrative to be quite awkward, and I was pretty convinced that I was not going to enjoy the story.  Fortunately, her narrative does get much better, and by a third of the way through the book the plot picks up in pace.  There are still some sections of the book that drag, but even in these parts I found I was still entertained, even if I was not fully engaged in the story.

In addition to this, I had some problems with Sophie as a character.  I love a strong female protagonist, and even though she was an endearing character, her constant questioning of all her words and actions was a bit of a bummer.  I love the curious scientist aspect of her, but I do not like the insecure young girl stereotype.  I also found that despite the many unique aspects of this book, the world building and the magic system were both rather average.  They were not bad, I just would have liked to see something a little more exciting or distinctive.

I would recommend this book to anyone likes fantasy and doesn’t mind a female protagonist who is insecure.  This was a good book, though not a great one, and I found it to be an enjoyable read.

I received a copy of this book from Netgalley and the publisher in return for an honest review.

Review of The Shadow Master by Craig Cormick »
« Review of Seven Forges by James A. Moore