Review of The Sword and Its Servant by Victor Salinas 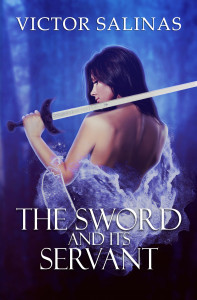 It is not often that one is able to find an independently published novel that is constructed as professionally as The Sword and Its Servant. Even at a first glance, you might be surprised that it is a small press/indie novel. The cover is gorgeous and rivals the jacket art from many of the novels distributed by large publishers, such as Tor and DAW, which have come out this year. The book is also seems as if it has been professionally edited, and is missing the rampant typos that are present in so many independently published novels. The Sword and Its Servant is Salinas’ debut novel, and the beginning of a YA (young adult) series that has six books planned.

Salinas’ new series is set in the world of Grauwelt, which is located in a different reality that can very rarely be accessed from Earth. Though the novel starts out with a common fantasy theme (a child finds himself sent through a portal into a different world) the story soon becomes incredibly unique in its setting, plot and characters, while somehow still incorporating some common fantasy elements and themes. This concurrence of the familiar and the distinctive was one of my favorite features of Salinas’ debut.

The Sword and Its Servant is told from several different points of view, and starts out on Earth with a young boy named Johannes, who hears the history of Grauwelt in a bedtime story that is read to him by his mother. As his imagination wanders, he imagines himself a knight, off to fight the nightmarish hound-like creatures of Grauwelt called the Lowa. It is not until he suddenly finds himself in a portal to another place that he realizes his imaginings might have become his reality. The story next introduces us to a girl named Einsa, who is imprisoned on Grauwelt in the pitch dark with a group of children known to the Lowa as the children of Mann. Einsa has been there the longest out of all of the prisoners, and she is the only one who has no recollection of a life before confinement. Lowa jailers come intermittently to bring scraps of food for the children to fight over, and to take one of the children away, never to return.

The book is also told from the point of view of several of the Lowa, who happen to be the sons of the King. The siblings are rivals, and when their father gives them an unheard of task, it soon becomes apparent that both a kingdom and the fate of the Lowa are at stake. Only the strongest and most cunning of the brothers will be victorious. Their task will be further complicated by Einsa, the children of Mann, and a magical sword with a mind of its own, who will all be trying their hardest to escape from the Lowa and bring destruction to the rulers of Grauwelt.

Salinas’ vivid imagination is originally what engaged me with this story. The Lowa are horrifying and complex creatures, and are a completely unique race of beings. The high fantasy genre is notorious for very rarely including civilizations that are not based on variations of humans, and the presence of such imaginative creatures and settings in this novel is sure to capture the attention of many connoisseurs of high fantasy. The plot of the novel is fast paced and full of plenty excitement, and it is a perfect introduction to fantasy for the YA age group. The novels themes include the loneliness and awkwardness of youth, and I would definitely classify it as a “coming of age” book.

If you are looking to read a book full of flowering prose or adult themes, I recommend looking elsewhere. Even though the book is well written, the writing is focused on displaying the inventiveness of the world and the setting, and on the action packed plot line. There are some horror elements to the novel, but its darkness and violence are perfectly fine for a YA audience. The writing lacks the grittiness of an author like Joe Abercrombie or the adult themes and horrifying scenes of the writing of Mark Lawrence. Obviously, this is perfect for most YA readers, and the book might actually be refreshing for some of you who want a break from the “grimdark” movement found in many modern fantasy novels.

Overall, I liked Salinas’ writing, and I am sure that it will be further refined in future novels. I loved the vivid imagination that he uses in his world building, and I am looking forward to reading more about Grauwelt in the future. The plot is fun and fast paced, and is perfect for YA audiences. I believe Salinas is trying to market this book to the older YA readers, but I think this book would be perfect for middle school and early high school readers as well. Others who may enjoy this novel include fans of “coming of age” fantasy, and fans of high fantasy. I would not recommend this book to anyone who is looking for fantasy with adult themes, or a large-scale epic on the level of G.R.R. Martin.

I received a copy of this book from the author and Understone Group in return for an honest review.

Review of Half a King by Joe Abercrombie »
« Review of Deadly Curiosities by Gail Z. Martin