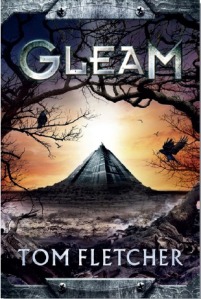 Gleam is the first installment in The Factory trilogy, a new series from British writer Tom Fletcher. This novel originally caught my eye when I found out the idea for the story was partly inspired by Mervyn Peake’s Gormenghast. Fletcher manages to do justice to this fantasy legend with a tale that is well imagined, fascinating, intensely strange, and that is sure to make many critics of speculative fiction swoon. Fletcher’s imagination is truly boundless, and it is obvious that Gleam is a product of this ingenuity. The world Fletcher has created in this story is incredibly complex and surreal, and never ceases to amaze the reader with its complete strangeness. I would place the genre of this novel somewhere between dystopian, fantasy, and “new weird,” but the style of the writing is a combination of Jeff VanderMeer’s and China Mieville’s bizarre plot elements, vivid imagery, and an “in the moment” narrative. These elements combine to create a unique story that is immersive without being rapidly paced, and that will leave to reader wanting to know more about his mysterious world and morally ambiguous characters.

Gleam follows the story of Alan, a man who had the chance to live in the luxury of the Black Pyramid at the center of the Gleam. Outside of the pyramid is the Discard- a giant heap of connected warrens that may once have been some sort of factory, but is now a decaying pile of unstable rubbish. There is little to eat and nowhere truly safe in the Discard, and every year the whole place sinks further into a deadly swamp. Alan knows the pyramid is safer, but he has too many unanswered questions about the shadowy authority that controls every aspect of the Pyramidders’ lives to feel comfortable there. Eventually these questions get Alan kicked out of the pyramid and thrown into the lawless wilderness of the Discard, where he creates a new life for himself as Wild Alan. But soon Alan realizes that the family he left back in the Black Pyramid is in danger, and to save them he must journey far deeper into Gleam than he ever wanted to go, where a secret dwells that has the power to change his life forever.

The distinctive and surreal qualities of this novel make it difficult for the reader to immediately adjust to the style of the narrative, the tone, and the setting. The first few chapters of Gleam are disjointed, both in time and tone. It takes a while for Alan to adjust to life in the Discard, and as he loses himself in alcohol and psychedelics, the narrative becomes fragmented to mirror his state of mind. It is not until Alan is given a purpose (to save his family) that the plot and writing style become structured. It is only after this shift in tone that the reader is able to firmly immerse himself in Alan’s world and get a feel for what Gleam and its inhabitants are really like, as well as a sense of the circumstances that drive the story’s plot. Though this initial disorder in the story may confuse some readers enough to put them off of the story, I thought it was a brilliant technique. Fletcher ensures that the reader’s sense of the story stems directly from Alan’s sense of his surroundings, and this allows the reader to truly get inside Alan’s head and experience things as he does.

Though Alan’s story is inherently a hero’s quest, he is far from the quintessential hero. His moral ambiguousness stretches further than his substance abuse and rough lifestyle; he is often indifferent to the consequences of his actions, and is willing to sacrifice anything or anyone in order to achieve his goals. Because Alan is trying to save his son, it allows the reader to feel some sympathy for his actions while still being aware of his many flaws. I also had a tendency to overlook Alan’s flaws because of the details of the truly bizarre world that Fletcher sets the story in. The mystery of the Discard and its oddities becomes a sort of character of its own, and is frequently the focus of the story. Fletcher makes his world come alive through vivid imagery, and the utter strangeness and incredible uniqueness of the setting are sure to capture and hold the attention of the reader.

I would recommend this novel to anyone who wants to read a completely new kind of speculative fiction. If you are open-minded and fascinated by things that are both surreal and bizarre, then this is definitely the story for you. I would also recommend Gleam to any speculative fiction fans that are looking to step out of their comfort zone and experience a novel that will expand their expectations of the genre. Though this is not a light or fun read, it is a fascinating one. Fletcher completely immerses the reader in the story without the use of a fast-paced plot line, and ultimately left me wanting to know more about this captivating story. I will definitely be reading the rest of The Factory trilogy as soon as it becomes available.

I received a copy of this novel from the publisher, Jo Fletcher Books, in return for an honest review.

The book is already released in the UK, but not the US.  If, like me, you don’t live in the UK and can’t wait until March 2015 for Gleam to be released, I recommend getting it from The Book Depository.  Here’s a link for anyone who is interested: