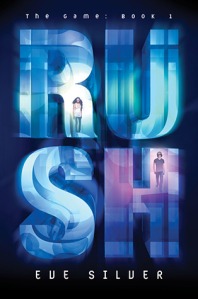 Rush is the first novel in the The Game series by Eve Silver.  This science fiction and dystopian hybrid has the pacing of thriller and all the plot elements of a story that is strictly young adult.  Though it is lacking in the character development and complexity that defines a well-written adult speculative fiction story, it is the perfect book for fans of YA who are looking to read an action packed novel with an original premise that still contains many common tropes (a possible love triangle, a mysterious boy who knows more than he admits, a tumultuous family situation, ect.).  Silver takes the reader on a wild ride that is shrouded in mystery, and will keep the reader guessing until the end.

The novel follows the story of Miki Jones, a teenage girl who is pulled from her life after a terrible accident into some kind of game.  Miki awakens in a strange place with several other teenagers and a sophisticated wristband that is glowing green.  She is given very little information: she is about to go on a mission, and that her wristband shows her health so she must not let it turn red.  Suddenly she finds herself carried across time and space to fight the Drau, a race of terrifying and beautiful alien creatures.  Her only guide for the mission is the team leader Jackson Tate, who is equal parts secretive, frustrating, and mysteriously attractive.  When Jackson tells Miki that the game isn’t really a game, but will actually determine the lives of her teammates and the ultimate survival of every person on earth, she realizes that she has been dropped into something far bigger than herself.  If Miki dies in the game, she dies in real life, and if she allows the Drau to win, the entire human race will be a thing of the past.

The premise for Rush is based off of video games, and there are video game terms and situations dispersed throughout the book.  Though Silver explains all these terms, I would definitely have gotten more out of the story if I was a gamer.  The storyline was intriguing to me, but I found the details and intricate strategies of “the game” to be the least interesting part of the novel.  I was much more interested in the Drau themselves, and the implications of their presence on Earth.  I also found myself incredibly curious about the “how” and “why” these teenagers were chosen to defend the planet.  Miki knows next to nothing about the “council” that controls the game, and why they would decide to fight the Drau in such a manner.  This mystery is what really drives the entire plot of the novel, and engages the reader with the story.

The relationship between Miki and Jackson would have been much more attention grabbing if Silver had gone into more depth with her character development.  Their interactions may be enough to keep readers turning the pages that thrive on light and easy reads, but for anyone who enjoys more intricacy and nuance in the stories they read will most likely find this relationship to be superficial and tedious.  Despite this, Miki is the perfect protagonist for a light YA novel; she is strong willed, confident, and can take care of herself.

The novel as a whole is built on action and a unique premise, and is not the kind of story that is deeply thought provoking or elaborate.  However, it is a thrilling, enjoyable, and easy read that is perfect for middle grade or YA readers.  I would especially recommend this novel to those that are new to the science fiction genre, as I think it would be a great introduction to the genre because of its familiar tropes.  The gaming aspect of the novel in particular is something that many readers will find familiar, and might help acquaint a new generation with science fiction.

I received a copy of this novel from YA Bound Book Tours and the author in return for an honest review.