Book Blitz and Giveaway: Out of Sync by A. Bin Juran

This post contains an excerpt of the book, an interview with the author, and don’t miss the 2 GIVEAWAYS at the end of the post! 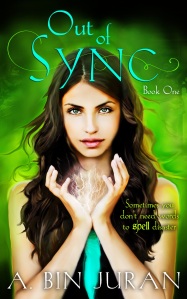 Out of Sync by A. Bin Juran
(Out of Sync #1)
Publication date: October 23rd 2014
Genres: Paranormal Romance, Young Adult
Synopsis:

I’m a magical misfit
I won’t let it define me
A bolt-zapping disaster magnet
But at least I’m still trying
The guy I like asked me out
I hoped my luck was changing
Then my coven trials began
…they’re harder than I expected
Now my life hangs in the balance
I don’t know what I’m doing
But I do know this:
I’m not going down without a fight.

When I opened my eyes, I noticed that I had been perched upright in a hallway across from one of the purification pods. A disembodied voice congratulated me on completing my second trial, somehow aware that I had regained consciousness.

My throat went dry as my eyes searched for cameras, paranoia surging throughout my system. These people were crazy; there was no other explanation for what I had just been through.

I swerved away from the pods; sure, it would be nice to be clean, but that’s how they got you— with the pristine, warm showers and scented soap. Before you knew what was going on, they would try to kill you again. In the back of my mind I wondered why they needed to clean you in between the attempts on your life, but I wasn’t about to try to understand their crazy.

I just wanted out.
Once I found my way out into the open air, I saw the hooded figures had reconvened.

One of them was speaking, and I could hear him clearly, as if he was standing right beside me, drowning out my thoughts. “Your next testing phase will commence within the next few days.”

A chill passed through me.

I steeled myself. No. Nope. Not gonna happen, buddy, I decided.
“The third trial is set by the coven which has shown interest in you, based on your scores, rank and lineage.

If you pass, the elemental trials will follow throughout the next few months, according to the full moon . . . .”

My ears buzzed as the announcer’s voice began chanting from inside my skull. My body was still shaking off the numbness in my muscles and the contrasting heat in my limbs.

I had to find a way out of here. The cold air was biting, sinking into my skin, clawing at me from beneath my clothes.

The announcer’s voice joined the crowd in chant, and the magic began to swell around me.

When do you find yourself singing?

In the so-called privacy of my car, where I can mess up the lyrics and mumble the rest to my heart’s content; on occasion, you might even catch some shoulder-action.

If you would compare your book to a similar one, which would it be?

Name three of your favorite books.

I’m something of a promiscuous reader, which to me, means that I’m usually reading (or listening to) several different novels at a time while committing to none — but once a novel grabs me, as these three have, it doesn’t let go even long after I’ve finished reading it.

My ‘must listen’ list includes Stephen King’s 11/22/63, narrated by Craig Wasson (a masterfully woven tale that incorporates time travel, JFK, suspense and wit), John Scalzi’s Redshirts narrated by Wil Wheaton (a fun sci-fi read filled with Scalzi’s characteristic humor), and Dead to the World by Charlaine Harris, narrated by Johanna Parker (romance, vampires, action and once again we find the common denominator — a healthy sense of humor and wit).

Which animal scares you the most? Why?

Cockroaches; yuck. Those spindly-legged creatures can get me off my feet faster than any exercise known to man.

When do you find yourself reading?

Being a mom, a wife and a full-time writer, free time is a very precious and rare commodity. Or in other words, I’ve learned how to utilize my coffee breaks to listen to audiobooks, and I sometimes stretch out the night with my Kindle.

When do you find yourself inspired?

Inspiration often strikes when I’m bone-tired, usually after I’ve just crawled into bed. I quickly discovered that if I don’t write it down — whatever ‘it’ might be, a snippet of conversation or a twist in a story line — it’ll slip away into oblivion, never to be heard of again.

Name a song that inspired you

Kelly Clarkson’s “People Like Us’ helped me find my voice when I was working on the blurb for ‘Out of Sync.’ I feel as if it captures the spirit of the book, which at its core is about a misfit learning to accept herself for who she is, and finding the people who will do the same.

If you could choose any superpower, what would it be?

I already fly in my dreams, without the dubious benefit of adding bugs to my diet. So, I would have to go with a remarkable ability I’d seen in the movie ‘Starman,’ in which an alien placed his hand above the cover of a book, and in the span of seconds, had read it in its entirety. Add to that the ability to understand the material within, and if at all possible, to remember it for later use, and it would be my ultimate superpower.

How would you describe your writing style?

Molly Harper meets Terry Pratchett — snarky fun with a side of humor and more than a pinch of suspense.

What’s next for you?

Now that ‘Out of Sync’ has hit the shelves, its sequel, ‘Out of Breath’ has (some of) my attention. It’s due to be released next year. The tagline reads: Are you sure you want to know?

I would reveal its blurb, but it contains a spoiler for ‘Out of Sync,’ and I’m pretty sure that kind of behavior will get me in trouble.

I’m also writing a paranormal novel, and I’m in the process of editing my third YA book, about an angel on her first mission. Both are unrelated to the ‘Out of Sync’ universe, and a lot of fun to write / edit.

When not immersed in books – be it writing or reading them – Ainat can usually be found nestling a cup of coffee in the company of her husband and twins. A former fast-food employee, T-shirt seller, and glorified secretary, Ainat eventually found herself with Bachelor’s and LL.M. degrees and working as a lawyer. A few years later, listening to a catchy pop song about dream fulfillment, Ainat decided to buy a clunky little laptop and get to work. Ten novels and a much better laptop later, she came to the realization that hitting the double-digit mark meant it was time to publish and start consuming coffee (though not necessarily in that order).
When she isn’t writing, editing, or mothering, Ainat enjoys reading promiscuously (which, to her, means she’s reading several novels at a time while committing to none), watching political dramas and sci-fi series, and taking embarrassing memos-to-self complete with accents and dramatic pauses that should never be unleashed, ever.
Author links:
http://www.ainatbinjuran.com/
https://twitter.com/ABinJuran
https://www.facebook.com/ainat.binjuran
https://www.goodreads.com/author/show/8422747.A_Bin_Juran
GIVEAWAY:

(1) One person will win an e-copy of Out of Sync, exclusive to this site (Int).

Leave a comment on this post telling me why you are excited for the book.  You must leave some way for me to contact you: email, or friend me on Goodreads so I can send you a private message.  Here is my Goodreads profile:

(2) Enter the Rafflecopter through the link below for the Blitz-wide giveaway.

Link for the Rafflecopter:

3 thoughts on “Book Blitz and Giveaway: Out of Sync by A. Bin Juran”